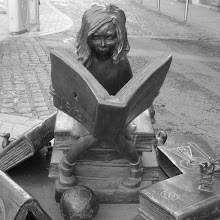 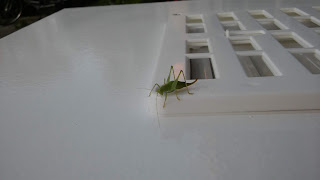 Ser posmoderno is a pleasure (part 2)

In Madrid I talked with people from Galicië to Azerbeijan, from Peru to Bangladesh and I saw an enormous power of positivity. I read anouncements for meetings. I met an artist that made wunderful work (and I invited him for that evening in the  'Enclave'), I bought some from him for one euro each and he said he would come for free to make wall-art if someone buys a ticket to come over. He already did so in Berlin. In the search, I mentioned before, for traces of what was Madrid thirty years ago, I ended up in a factory of tobacco. It turned out to be occupied since ten years. I could walk in for free and inside there was a huge place full of music and art. (Hopefully I'm not offending anybody saying I enjoyed this lively, lived kind of art instead of The Prado). There took place several meetings. Smoke and drugs were not allowed. I made a trip by bike through  'Rio'. Certainly an expensive project, but how couragious to spend so much money for a public space that apparently has no measurable economic value for itself? There was a walk of hundreds, maybe thousands old men and women that made 'kilometros para recordar'. Youth laughing while taking a shower between the trees and skaters on the bridges over the Manzanares. I ended up occasionally on a exhibition of Grafico de Buenos Aires in the thirties.

Things that you, Norberto, saw around you were quite different as what I saw. You mentioned three times the child that in your opinion was already an orphan, as her parents where both looking on their smartphones. The thing that astonished you the most, was the father 'playing with balls' on his screen. Let me be clear, I'm not a fan of using smartphones day and night. But dear Norberto, I saw them too, parents looking on their screens. And in my case the child was happily playing with the towels on the table while her parents were occupied with their own stuff. She took advantage of the situation. Finally she had the oportunity to play without danger of a repreminand not to do so, what people might think, how to behave properly and so on. I just want to say that 'spending time' with children do not has te be always a positive thing. Sometimes it can feel free for children to explore the world around them without intervenience of adults. (the 'invention' of the 'fragile child' with whom we should play with, is also quite new). That does not make them orphans.

On the other example you gave, I tried to discuss already at the meeting but I do it here again. You seemed to be shocked about an artificial, turquoise penis they sell in a shop around the corner. (I do not get the exact clue of what demontrates us this penis about living in postmodern times but anyway). It was equiped with a part that could directly massage the G-spot. I think that is not so much to be shocked about. In previous eras and still now, men (and most women) had no idea of the existance of a G-spot at all. Mostly not even that of the clitoris. Sex in general was -and still is- something that woman should give to their husbands. Enjoying it, is quite a recent thing. So, if a woman in this postmodern era has the oportunity to buy something (with her own loan) that gives her joy without giving pleasure to her husband first, I don't see what could be so 'value-less' about that.

In my opinion, despite of the overheating things happening in the the financial world, making us replacing things always faster, or as Cristina Marina said before you, 'se tratta de portar consumadores al producto' there is not so much to fear. 'Anxiety is a bad adviser', we use to say in Holland. If anxiolyticum is the medicine of the postmodern times -as you claimed- maybe we should look different at this era. It offers us vast opportunities  To think. To invent. To explore. To create joy and pleasure. Nowhere I saw this 'state of alienation' where people should be held in.

To conclude I would mention the two men I saw kissing passionatelly on the entrance of the metro. It seemed me a exposure of hopeful times. The freedom to love the one we want instead of what society has in mind for us to be properly. I'm pretty sure that this was not possible -or thinkable- at the time you or I were born.

In answer on the question if we should find a way to recover or, at the contrary, discart values that seemed obsolete, I would say: There might be new values. The challenge is to find out what those are. Possibly you could ask it the new generation represented in your students. I'm anxious to hear about their answers. Probably they will mention things that make life worth living.

Norberto, thank you for the presentation and for the lesson in Spanish. I certainly come back to Madrid, 'Ciudad lleno de possibilidades'

To Maria I would say: "Grazie del invito e a presto".

'Ser posmoderno' is a pleasure (part 1)

Exactly three weeks ago I had the pleasure to join a meeting in a bookstore named 'Enclave de libros', in Calle relatores in Madrid. Were Norberto Chaves presented his book 'Ser posmoderno'. I ended up in this tiny but cozy bookstore by chance. Actually I was looking for information about Madrid in de late eighties because of my book about an Argentian immigrant that arrived here at that time. But I bought a totally different thing: poems written by the father of Marcela de San Felix, known as Lope de Vega, four centuries ago. I got a kind of lost in the enormous offer of various subjects and titles (what to think about a 'Naturism in the twenties' or 'Kroatian poetry?), seeking for my attention. A kind of  'google in real life' with the smell of fresh printing as a bonus. The owners of this paradise of paper were Italian, which made a conversation more easy for me. Maria invited me to join one of the meetings they organise, just in the back of the bookstore. Not having enough knowlegde of Spanish was no excuse, she said. When I had the courage to read poems of Lope de Vega, I centainly should join the meeting. Practicing Spanish was the only way to learn it.

'Seven a clock' in Spain has to be considered as an 'indication'. But than, finally, the writer and an audience of ten, fifteen men and women started to listen. After an introduction of Cristina Santa Marina, doctor in sociology and filosofy, Norberto Chaves himself took us on a journey from Hamlet to Italo Calvino to Nietzsche. He said that 'Ser posmoderno' was a book to discuss about and even if I did not read neither bought it, I'm eager to accept this kind of invititation. Actually, I already did - in Spanish- on that evening.

Norberto, you don't have a very optimistic view of the world, on mankind, and (lack of) values in this era. You told us humble that writing was something you 'had to do' in life, you could not nót doing it. And you received a shy laughter of the audience by telling us that the only reason to live was not wanting to die. The first thing you said is similar to my attitude to writing, I can not imagine not to write. At this very moment I should have been working. To fix kitchens and bathrooms to earn money to pay the rent. But I prefer to write. Having no boss or colleages, I'm not bothering nobody by doing so. But about the second claim: life as a state of being because of not wanting to die, that sounds pretty anxious to me.

In the book you make an assessment of an inability to answer to a changed, changing society. Especially regarding values. Speculation as a culture, the absolute price elasticity -nothing is worth anything, it only costs something, provisionally- , and the effects of this to politics an, in the end, the way people think. Without having read the book I take the opportunity to claim that value and price has always been a pretty elastic thing. With the difference that in 'modern' times most people thought is was not. Now we do know. And that could have advantages too.

I admit, speculating on what possibly could happen with the price of barrels of oil to the price of houses might have taken a flight forward, but could'nt it be just because of that, that people are searching for other ways of looking, of living their lifes and, in the end, of thinking. What is worth (to live for) without looking at the (provisionally) cost first? As it is not given for granted that our children has a better (financial) life than we have, if there's no promise that proliferate with your talents give you the freedom of more money to do (buy) what you want to do, than maybe it's time to do, to act different in this very moment. Speculating of what prices might could do is no garantee anymore.

And this different way of thinking is just what I saw around me in Madrid. Plenty of initiatives of creative young people that do not believe in fairy tales of economy and grow as an law of nature that we have to obey or believe in. Of course, one could oppose that it's just a small, intelectual part of the world. Or, more mean, these are children of parents with money to cover their back. But I doubt about that. 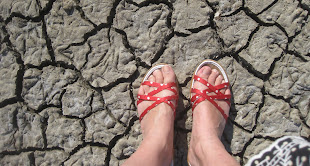